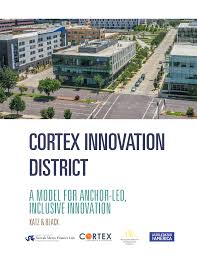 The Cortex Innovation Community, located in the Central West End of St. Louis, is ranked as one of the top five innovation districts in the world. Founded in 2002 and built within a blighted 200-acre former industrial area, the district generated $2.1 billion in economic output for the St. Louis region in 2018. In February 2020, almost 6,000 employees worked in Cortex. The nonprofit Cortex is led by a board comprised of the five St. Louis anchor institutions who founded Cortex—Washington University in St. Louis, BJC HealthCare, Saint Louis University, Missouri Botanical Garden and the University of Missouri-St. Louis. In 2002, four of the anchor institutions pledged $29 million in equity to acquire land for the new district. This patient capital, along with powers granted by city government that include eminent domain and land use control, allowed Cortex to strategically buy limited properties within the district while defining the future use of every parcel. This City Case details how Cortex originated, how it has evolved, and what its impact has been on the St. Louis economy.